Hunter Tremain recognized by the Army Core of Engineers 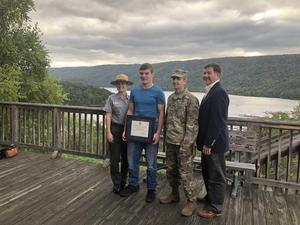 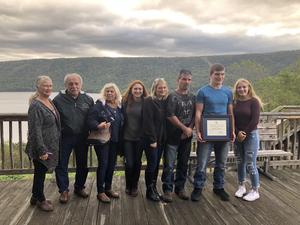 Hunter Tremain was recognized for bravery, selfless service, and service to others by the Army Core of Engineers today at Lake Raystown. We are proud of you!

Teen honored by corps for heroism

Hunter Tremain of Somerset County, was honored by the U.S. Army Corps of Engineers Friday. On hand for the presentation were, from the left, park ranger Alicia Palmer, Tremain, District commander Col. John Litz and operations manager Nick Krupa. Photo by KYLIE HAWNA Somerset County teen was honored for his heroic actions by the U.S. Army Corps of Engineers, Baltimore District, at the Ray- stown Lake Visitors Center at Seven Points at Raystown Lake Friday.

Hunter Tremain, a senior at North Star High School in Boswell was camping and recreating with his family at Raystown Lake this summer when he witnessed an accident, but he didn’t just ignore the scene in front of him, he took charge.

Tremain was recognized with a certificate of appreciation from the U.S. Army Corps of Engineers not only in front of corps officials, but also in front of family, friends and the superintendent of North Star School District, Louis Lepley.

Tremain was on a jet ski when he observed a man being ejected from a boat traveling too fast in a nowake zone.

“I went to the victim, and he was responsive at first, then he became unresponsive,” he said. “We got him into a boat, then called 911, and then I went to a campsite where someone I knew was able to perform CPR.”

Tremain said emergency responders were able to come to the scene, but unfortunately they were unable to safe the gentlemen and he passed away at the scene.

While some may have just passed by the scene that day, Tremain said it wasn’t something he had to think about, but something where he knew help was needed.

He acted in a valiant manner beyond his years,” Litz added.“He assisted in providing critical care and medical support, despite finding himself in a remote area,” said Litz. “Hunter’s decisive actions were invaluable and gave the individual the best possible chance of survival. He responded to a crisis situation in a prudent and responsible manner that reminds us of the capabilities and compassion that is present in our youth. His selfless actions are a direct reflection of Hunter’s upbringing.

Nick Krupa, operations manager at Raystown Lake, said that while the lake has a robust water safety program, he’s thrilled guests take the time to look after one another, especially in emergency situations like this one.

“I appreciate guests helping guests,” he said. “Though the outcome of the situation wasn’t positive, Hunter was able to give him the best opportunity for survival.”

Krupa also commended Tremain’s quick thinking and willingness to help in any way he could.

“I’m proud of the youth who take action in situations like this,” he said. “It would have been easy for him to turn away, but he saw something, and he got involved and tried to do something about it.”

Kylie can be reached at khawn@huntingdondailynews.com.