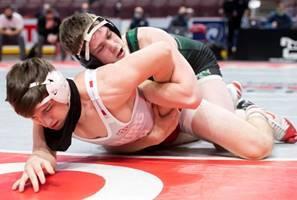 Yoder finished as the district runner-up, placed fourth at the Southwest Regional and took second at the West Super Regional.

North Star’s Connor Yoder, top, wrestles Hamburg’s Dalton Gimbor in a 152-pound quarterfinal bout at the PIAA Class 2A wrestling championship at the Giant Center in Hershey on March 12.

Yoder and the Cougars will be under new direction this season. Sal Lascari, former Berlin Brothersvalley coach, returns to his alma mater. The former Cougars standout takes over for Tim Rosa, who stepped down after nine seasons at the helm.

Sophomore Cayden Turner, junior Logan Reffner and senior Cameron Snoeberger are a trio of other North Star wrestlers to watch this season. Reffner finished as the D5 runner-up at 145, while Turner and Snoeberger claimed bronze at their respective weight classes.