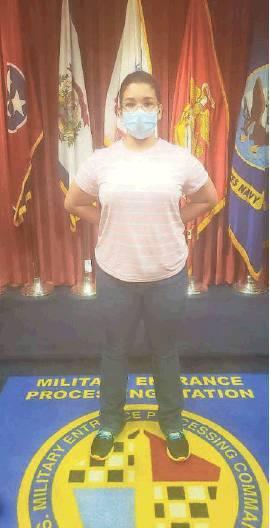 Mackenzie “Mac” Jackson will be graduating May 25 from North Star High School. Then she will be heading to the U.S. Navy.
“Mac” will be the fourth generation of her family to be in the Navy. Her great-grandfather, her great-uncle, her mother and now she, committed to serving in the military. Jackson was born in Connecticut in 2003. Her mother, Linda-Jean Taylor-Phillips, who served in the Navy from 1999-2003, was stationed there at that time. Jackson was originally interested in the Marines until the Navy recruiter heard her talk about bring a firefighter. He said “Have you heard of Damage Control?”
It so happens she did — a lot. Her mother was one. After six hours sitting in the recruiter’s office and a visit to MEPS on a Thursday and Friday and she was set. She will be going in as an Activation Machinest Mate (AD) and might be cross rating to Damage Controlman (DC) or Hospital Corpsman (HM) in two years. Jackson has a younger sister who looks up to her. She has a dog named Sarge, a cat and guinea pig. She loves her animals.
Jackson is an active member of the Boswell Volunteer Fire Department. She was a member of the North Star Color Guard.