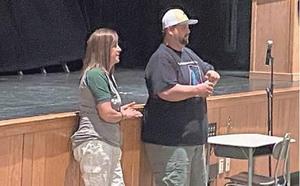 Brian Furman will be eight-years sober in September. The Boswell native spoke to a group of North Star High and Middle School students Thursday about the lifestyle he previously led. During a separate event in the evening, the 2004 North Star graduate said that it was only once his mother kicked him out of his home that he decided to become clean. He now advocates for sobriety. “We can’t save everyone, but we can share the information,” he said about the resources available for addicts in the area. “If we save one person, we did our job.

“People are dying out there. People still don’t know the way out.” Thursday’s events were organized by the Boswell Improvement Group, a team of volunteers looking to better their community. Approximately 30 people attended the Thursday evening event. A mother of a recovering addict and her son spoke about their experiences, along with a recovering alcoholic from Somerset Township. Present at the meeting were representatives of the area’s Narcotics Anonymous, Twin Lakes Center and Sage’s Army, a Greensburg-based recovery organization in the name of Sage Capozzi, who lost his life to addiction.

Certified recovery specialist Rich Potts said that there is a stigma that “it can’t happen to my kid” when it comes to addiction. “There’s a lot of stigma involved on the family’s part,” Potts said, adding that addiction can happen to anyone. Scott N. — who asked the newspaper not use his last name because of the anonymous association with Narcotics Anonymous — said that his organization is there for anyone with any addiction. Vices can include alcohol, drugs, food and others, he said. “We’re a tight-knit community, really,” he said. “There’s a bond of pain that really ties us together.”

UPMC Western Behavioral Health therapist Alyssa Peters said that a family support group is offered Tuesday nights at Somerset Anglican Fellowship church, located along East Union Street in Somerset Borough. “Our group is kind of unique, because the addicts can join, too,” Peters said. “It’s the coming together of the family member and the addict.” Furman, who now works for an excavating company, said that he is willing to help any addict who reaches out to him. “I’ve buried too many people in my life,” he said. “I’m sick of burying people.” For anyone looking for help, Narcotics Anonymous can be reached at 1-888-251-2426. For information about the family support group, call 814-443-3639.