THE NEXT LEVEL: North Star senior Gardner to play softball at Pitt-Bradford 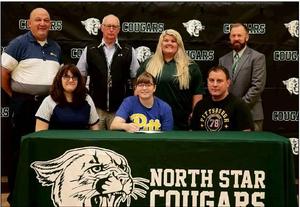 North Star softball standout Grace Gardner ironically wasn’t interested in softball at the start of her athletic journey when she was younger.

The senior started by following soccer and basketball, and also began to watch Major League Baseball. Gardner’s father, Drew, eventually began coaching and getting her more involved with softball, which carried up to high school.

Gardner was then able to attract attention from colleges, and on Tuesday, signed her National Letter of Intent to play softball at the University of Pittsburgh at Bradford.

“It feels really good to be able to be signed,” Gardner said. “It was my teammates and coaches that got me to where I am. We’re like one big family. I can’t thank them enough for the help.”

Gardner will be suiting up for the Panthers under head coach Tina Phillips. Pitt-Bradford, a Division III school, competes in the Allegheny Mountain Collegiate Conference (AMCC).

The Panthers were named the AMCC co-conference champions on Saturday.

Gardner will be majoring in criminology and intends to pursue a career in law enforcement upon graduation.

“I mainly liked how small the school was,” Gardner said. “You really get to have one-on-one relationships with your professors, which I like, plus it’s a very good college. The whole atmosphere with the school and the team is like a family. That’s what our team is now, which made it even better.”

Despite not having a junior season with North Star due to the coronavirus pandemic, Gardner was able to compete in travel softball to keep her skillset intact.

Gardner, who is predominantly a catcher, played one year apiece with the Laurel Highlands Chill and the Lady Canes, a squad based out of Greensburg.

“It really helped me out in the long run,” Gardner said of playing travel softball. “It was great being able to meet new people and have so many different experiences. I was able to learn more and about the game, too.”

Gardner was also able to make an impression on her high school coaches, as she earned a letter in all four of her years with North Star.

Cougars head coach Marissa Kornprobst called Gardner a natural leader on the field, while being a strong presence behind the plate.

“She’s very strong mentally and physically,” Kornprobst said of Gardner. “She’s very commanding on the field as a catcher. She’s able to see plays before they happen and set up the fielders to be prepared. There’s no worries when she’s behind the plate, it’s great to watch her in action. She’s maybe allowed four past balls all season.”

Kornprobst added that she expects Gardner to make a big impact during her freshman season when she arrives at Pitt-Bradford.

“Grace is not a nervous person, so I don’t think she’ll be shocked by being on a higher stage,” she said.

“I know she has what it takes to compete at the next level, and she’ll do whatever she can to help her team compete. I’m very proud of all that she’s accomplished, and I can’t wait to see what she does while she’s there.”

Gardner said one of her main goals while playing for the Panthers is to help build the team.

According to Gardner, she was informed by Pitt-Bradford’s coaches that there will be around 22 players on next season’s roster, as many of this year’s seniors will be retuning for their extra year of eligibility.