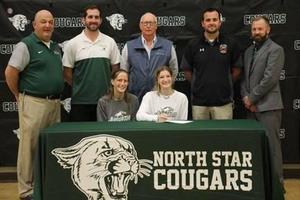 North Star senior Steph Emert’s choice for where she wanted to attend college was a lot easier than she expected.

When narrowing down her options of where she hoped to go, Juniata College was one of the final two schools on the list. It was then Eagles head women’s basketball coach Danny Young-Ulrich reached out to Emert to play for the team, and after that, her decision was clear.

On Thursday, Emert signed a National Letter of Intent to play basketball at Juniata.

“Being signed feels really good,” Emert said. “I was very happy when I found out that the college was still showing interest in me. I’ve wanted to play at the collegiate level since I was young.”

Entering into pediatric physical therapy, Emert will be competing for the Eagles, a Division III program that is a part of the Landmark Conference.

She will also be teammates with Berlin’s Sarah Smith, who signed with Juniata earlier this week.

“I really loved the family atmosphere of the college,” Emert said. “The coaching staff and the team were very welcoming, and I really became interested in the college as soon as I stepped on the campus. With it being one of my final college choices originally, too, it made the decision a lot easier to make.”

Emert has been a role player for North Star for all four years of her high school basketball career. After coming off the bench as a freshman and sophomore, averaging 5.0 and 5.6 points, respectively, she cracked the starting lineup for her junior season.

The Cougars did not roster any seniors in Emert’s junior year. This put Emert into an early leadership role, which she embraced and helped North Star earn an appearance in the District 5 playoffs.

Emert was second on the team in scoring as a junior with 13.4 points per game, before leading the squad at 12.4 points per contest during her senior season, as the Cougars again made the district playoffs.

“Steph has been a key player for us in a lot of ways,” North Star head coach Joe Zimmerman said. “She would spark runs on offense, while also playing very good defense. She played a big role for us in many of our games, especially for these last two years.

“One of her best characteristics is that she always gives 100% and always wants to improve. These qualities will definitely help her at the next level and will shape her into being an even better player. I’m very excited for her, that she gets to have the opportunity to continue playing basketball, and I definitely see her making an impact.”

Emert’s play on the court resulted in her being named Second Team All-County her junior and senior seasons, as well as WestPAC All-Conference during her senior year.

“My goal was to always work harder because I was playing against bigger girls,” Emert said. “I had to show that I wouldn’t back down and I would always play my best. Plus, I know I had people counting on me, so I had to step up.”

Off the court, Emert was a member of the Cougars’ girls soccer team and ran track for Shade High School in a co-op for four years.

Emert was also on the 1600 meter relay team that placed eighth at the PIAA track and field championships during her freshman year.

Emert said she considers her four years of athletics at North Star a success, and is thankful that her teammates and coaches always made it a family atmosphere.

“It was mainly my two coaches, Joe and Bryan (Ridilla),” Emert said. “They were definitely the most impactful people on me. They always pushed me to give the most effort, and inspired me to play the best I could. I had a great time at North Star, and I’m excited to try and make an impact right away at Juniata.”