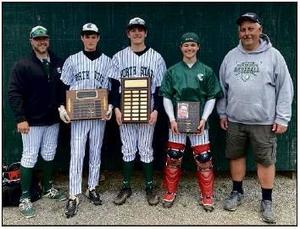 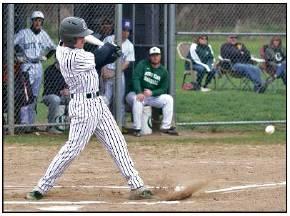 In 2019, Myers threw in the championship game, earning the win as well as the Most Valuable Pitcher Award.

On Saturday, Myers did his job on the mound once again, tossing a complete game as Forest Hills defeated North Star, 7-0, to capture the tournament title.

“He’s been awesome all year for us,” Forest Hills head coach Joe Carpenter said of Myers. “He’s a great pitcher, and we’re fortunate to have him. He’s such a competitor. He’s had a great senior season for us so far, and this was another solid showing for him.”

Myers’ complete game effort resulted in him being selected as the Most Valuable Pitcher for the second time.

The senior hurler worked in a strong mixture of his fastball and curveball to strikeout 16 North Star hitters, while scattering just six hits and not allowing a walk.

“Every day you try to come out and compete, and it’s extra special in a tournament because everyone wants to win it,” said Myers, who won his fifth game of the season. “My teammates made the plays today when they needed to, and I made them when I needed to. I was mainly working just fastballs in there, and adding a curveball when you need it.”

Eight of Myers’ strikeouts were looking. He struck out the side on three different occasions, and had at least one punch out in all seven innings.

“He was definitely pounding the zone,” North Star head coach Mike Blucas said. “He made short work of us in the first few innings until we put the bat on the ball.”

Catcher Brook Williamson was named Most Valuable Player, as the Rangers outscored their two opponents by a combined score of 21-1. Three of Forest Hills’ title wins have been over host North Star.

“First of all, we love coming here,” Carpenter said. “We get treated so well, and they do a very nice job with the tournament. We look forward to coming here every year. We’ve obviously had some years that we didn’t win it, since there’s great competition. Hats off to North Star, they played a great game today.”

However, the Cougars went just 1-for-12 with runners in scoring position. In three separate innings, a runner was stranded at third base.

“In our losses this year, that’s been the main problem for us,” Blucas said. “We were leaving guys on base and not having clutch hits. That’s been an issue all year, and we need to get it turned around for the second half stretch. We just got to have a short memory . . . I would just think we need to get back to work on Monday with some good batting practice.”

Cayden Turner, who was selected as Player of the Game for the Cougars (4-6) in the championship, went 2-for-3 with a double and a triple. Garrett Huzsek tripled, and Connor Yoder added a double.

Forest Hills scored one run each in the first, second and fifth innings to build a 3-0 lead after five frames.

The Rangers then tallied four runs in the bottom of the sixth, however, three were unearned after coming in on a dropped fly ball.

Williamson doubled, drove in a run and scored twice. Colton Cornell had two hits and an RBI, while Devin Kreger had two runs scored.

In Ferrellton, after trailing 6-2 after two innings, Bishop Carroll erupted for 11 runs over the ensuing three frames to defeat Meyersdale 13-7 in the consolation game of the Boswell Area Jaycees High School Baseball Classic on Saturday.

Tyler Geiger also tripled, while Boyce added a double. Brycen Sechler took the loss after throwing all five innings in the shortened contest.

Player of the game: Johnny Golden, Bishop Carroll; Meyersdale did not have one selected