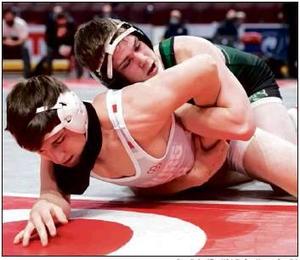 Despite a slow start, Yoder turned in a strong year on the mat while competing in the 152-pound weight class, normally known to be filled with skilled upperclassmen. The Cougar freshman continued to work with his teammates and head coach Tim Rosa, which led to continued progression. In the end, Yoder was just one of two Somerset County wrestlers to place at the PIAA tournament, and he was selected as the Outstanding Wrestler for the 2020-21 season. “It feels great,” Yoder said. “I’m honored to be chosen. There are a lot of great wrestlers in Somerset County, and it means a lot to know that I’m with the top ones. I always expect big things out of myself and have high expectations, so I’m always putting the work in, and I’m glad to see it pay off.” Yoder compiled a 21-10 overall record for the year and was the only county wrestler to surpass 20 wins.

He earned a fifth place finish at the state tournament, joining Meyersdale’s Jalen Stephens (sixth) as the only area wrestlers to earn a spot on the podium. “At the beginning of the season, I was rusty and had some losses I shouldn’t have, but they were against quality opponents,” Yoder said. “As the season went on, I progressed and got up to the level I wanted to be at, which led to me earning my medal.” Yoder was one of the top wrestlers on a predominantly young roster for North Star, who led the county with six wrestlers chosen between all-stars and honorable mention. The Cougars’ selections included three freshmen, a sophomore and two seniors. Seniors Nathan Pelesky (19-3 record) and Bryce Salyers (12-11) were two of the leaders on the Cougars’ squad. They were joined by sophomore Logan Reffner (14-5) and freshmen Cayden Turner (17-7) and Braden Livingston (11-13) along with Yoder. Pelesky earned the Codispoti-Maslak Most Falls Award for the second consecutive season after totaling nine pins. Reffner shared the Walter “Pip” Jarosick Fastest Fall Award with Conemaugh Township’s Austin Elliott after both recorded a pin in just 8 seconds.

“What you saw this season was a very young team that had a slow start and found its groove,” Rosa said. “With four freshmen in the lineup, it took us a little longer to find our niche, but when we did, it was very good. We definitely came a long way. We had three really good seniors that showed tremendous leadership and will be remembered for more than just wrestling. They set an example for the younger wrestlers.” Despite North Star’s strong showing, Berlin ended the Cougars’ run of four straight seasons of retaining the Daily American Trophy for the county’s top team. The Mountaineers claimed the top spot for this season after posting an 8-1 record. In head coach Braden Fochtman’s first year at the helm, Berlin went undefeated in conference dual meets, with the Mountaineers’ lone loss coming at the hands of Tussey Mountain. “It definitely was a process, but being able to step into a previously well-coached team was very nice,” Fochtman said. “Sal (Lascari) really had this team in a good spot, plus the seniors were already great leaders. The underclassmen really bought in to what we were trying do, and overall, it was definitely a great atmosphere. I’m proud of the guys.”

Berlin tied Meyersdale for the second-highest number of selections in the county with five. Brady Boburchock (14-2), Grant Mathias (11-5), Landon Ulderich (8-3), Landon Wellington (12-4) and Gabe Latuch (11-5) each earned spots for the Mountaineers. “Our guys put together a great year,” Fochtman said. “Some guys didn’t get as far as they wanted, but they all had great seasons. Brady was undefeated going into regionals, and Gabe had a match-clinching win against North Star, which was a huge win for us. Each one of the guys for us, and everyone on the list, definitely deserve to be there.” Meyersdale’s Stephens (10-6), Austin Broadwater (8-3), Trevor Donaldson (7-4), Bryant Most (6-4) and Collin Krause (5-3) earned spots on the list. Conemaugh Township and Somerset rounded out the selections with two each. Ethan Hemminger (8-4) and Josh Augustine (3-5) were selected for the Golden Eagles, while Tristan Hawkins (8-3) and Ryan Krassnoski (7-3) were chosen for the Indians.

There was no banquet held this year due to there only being two teams that would fully commit to attending with COVID-19 restrictions.