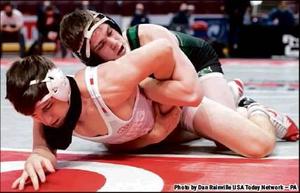 HERSHEY — Connor Yoder could get used to this.

The North Star freshman enjoyed his first taste the “Sweetest Place on Earth,” as he finished fifth at 152 pounds at the PIAA Class AA Wrestling Championships on Friday.

“Hopefully, I’ll be back here every year after this and keep going up the podium,” Yoder said after he beat Alan Alexander of Pope John Paul II in his final bout. “I just need to keep working harder and harder every year. I didn’t put in the work that I needed to get up higher on the podium. Just put in the work and the higher you’ll go.”

Yoder and Meyersdale’s Jalen Stephens, who placed sixth at 285 pounds, were the only county wrestlers to reach Hershey.

“We’re happy with a fifth,” North Star coach Tim Rosa said. “We have a freshman who is probably a little small, not the strongest kid in the weight, I think fifth is a good day. You always want a little more, but we’ll take it.”

After a scoreless first period, Yoder was able to ride out Alexander in the second period. Alexander gave him an escape to start the third and was unable to come with a takedown.

“There’s a bunch of gut-check times when it’s 1-1 in the third period or 1-0 at the end of the match,” Yoder said. “All of them are good matches. You’ve got to keep you head to be in all of them and remain mentally tough.”

Rosa was impressed with how Yoder managed his final match.

“It just shows his wrestling IQ, too,” Rosa said. “He’s pretty poised for a freshman.”

Yoder started the day with a 5-0 loss to Hamburg’s Dalton Gimbor but rebounded to pin Fort LeBoeuf’s Jack Rimpa in another one of those tight matches.

With the score tied at 1 in the third period, Yoder headlocked Rimpa and pinned him.

A 7-3 loss to Boiling Springs’ Michael Duggan sent Yoder into the fifth-place match.

“I’m happy with how the day went,” said Yoder, who concluded his freshman season with a 22-10 record. “It was a good day. I got some wins that I should have and went out and fought in the losses, so all in all, it was a good day.”

Stephens, who placed third as a sophomore and fourth a year ago, wasn’t quite as pleased with his day in Hershey.

“Not good. I’ve just got to figure it out,” Stephens said.

The Columbia recruit picked up a dramatic win in the first round of consolations, beating Marion Center’s Marvin Beatty 3-1. Beatty looked set to ride out Stephens but was called for stalling with 4 seconds remaining in the third period, which sent the match to overtime. Stephens took advantage, scoring on a sweep single 35 seconds into the sudden-victory period.

“He wrestled well that match,” Meyersdale coach Christian Hutzell said. “Obviously, he could have done a little more, but he got the win.”

Stephens wasn’t able to build on that momentum, however, falling 3-0 to Hogan Swenski of Bermudian Springs in the consolation semifinal round.

A 7-3 loss to Emmanuel Ulrich of Mifflinburg left Stephens in sixth place.

Stephens has struggled with health problems this season — he wrestled just once prior to the start of the postseason — but he wasn’t using that as an excuse.

“Today, I was pretty sick, actually,” he said. “But I still wrestled bad, even with that.”

Stephens ends his career as one of the most accomplished wrestlers in Meyersdale — Somerset County history.

“He has had a really good career for us. I’d have liked to have seen him attack a little more. We saw flashes there. He’s had a great career, and he’ll be missed,” Hutzell said. “I expect big things out of him at the next level. I’m hoping that the health issues are worked out and he can focus on academics and wrestling.”