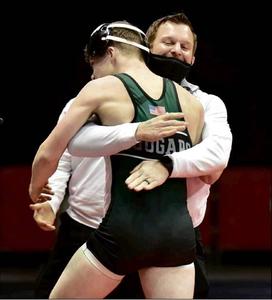 INDIANA — Connor Yoder and Jalen Stephens etched their names alongside some of the greatest wrestlers in Somerset County history on Saturday.

Yoder placed second at 152 pounds and Stephens finished fourth at 285 at the West Super Regional Class AA Wrestling Tournament. By doing so, they guaranteed themselves spots in the PIAA tournament and state medals.

A senior, Stephens joined brothers David and Michael Warnick as the only Meyersdale wrestlers ever to place three times at the PIAA tournament.

“We have a board down in in our wrestling room with the names of all of the state place winners and regional champs,” Cougars coach Tim Rosa said. “Connor was just saying today how he spends a lot of time looking at that board, visualizing his name up there. It’s going to be nice for him to see it there.”

Yoder punched his ticket to Hershey with two victories in the opening session.

He knocked off Northwest Regional champion Jack Rimpa in the first round. Yoder led 3-2 in the third, but the Fort LeBeouf wrestler escaped with about a minute remaining to send the match to overtime. In the sudden-victory period, Yoder took Rimpa down directly to his back for the win.

“I just kept fighting at it the whole time on our feet,” Yoder said. “He was aggressive and big and strong, like most of the other kids in the bracket. He kept shooting with his elbows out. In overtime, all you need is one point to win it, so I just gave it everything that I have all at once.” lier in the postseason. Chestnut Ridge’s Luke Moore had beaten Yoder 4-2 for the District 5 title. This time, Yoder rode Moore for the entire second period, then escaped in the third for a 1-0 victory.

“That was really nice,” Yoder said. “I’d have much rather gotten that win here today in the semis than two weeks ago in districts. It means a lot more now.”

Moore ended up finishing third in the bracket to join teammate Ross Dull as state medalists for the Lions.

Yoder lost 17-6 to Laurel’s Grant MacKay in the championship round. It marks the third time this season that MacKay has beaten Yoder.

“He seems to have my number every time we wrestle,” Yoder said.

Despite the loss, Yoder was excited to assure himself of a state medal.

“It feels really, really good,” he said. “It just means I have to keep working and working next year. Once you do it this year, you’re expected to keep doing it, so you’ve got to keep up with expectations, work harder and keep going up the ladder.”

Stephens has attempted to do that as well, but he’s found climbing a rung each year can be difficult. After placing third in the state as a sophomore and fourth last year, the Columbia recruit will face a challenging path in Hershey. As the fourth-place finisher, he’ll draw the top wrestler from the eastern portion of the state in the first round at the Giant Center.

Meyersdale coach Christian Hutzell is hoping that Stephens will relax a bit more now that he’s guaranteed a spot on the podium in Hershey.

“I think the pressure’s kind of off,” Hutzell said. “At this point, we’re at Hershey. Hopefully, we can just go wrestle and move a little better than we have the past few weeks.”

Stephens went 2-2 on Saturday, falling 3-1 in overtime to Reynolds’ Rocco John-Daniello to start the tournament. The Meyersdale senior stayed alive in the bracket with a 7-3 victory over Tussey Mountain’s Matt Watkins.

“The first match was very conservative, like last week,” Hutzell said. “The second match he got more into his fakes, got a few more attacks. Still not where we want him to be, but he’s getting there.”

Facing Laurel’s Mitch Myles, who is known for big moves and pins, Stephens shot and scored off the opening whistle on his way to a 5-2 victory.

“He told me he was going to go out, and hit a sweep and he went out and hit a sweep,” Hutzell said. “If he sets his mind to it, he can do it. I think you saw that there.”

That aggressiveness was missing in Stephens’ final bout of the day, a 1-0 loss to Girard’s Jordan Schell.

“I just need to be aggressive and attack. I can’t have those 1-0 matches,” Stephens said.